Inequality of Gender From Birth 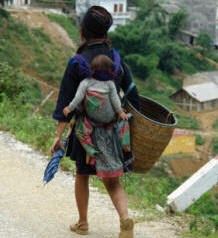 Gap in equality of gender exists in many countries and cultures around the world.  In the Hmong culture, gender relations exist from the moment of birth.  Access to education is the key to economic progress for Hmong families regardless of which country they reside in.

This following was taken from a paper written by Peng Xuefang, “Sociocultural Perspectives on Gender Relations of the Hmong in Thailand”.

The Hmong gender relations and traditional culture are inseparable.  In Hmong traditional society, gender inequality begins at birth with the burial of the placenta. The burial of placentas signifies the distinction between the males and females.  Men are considered superior to women.  For a traditional Hmong woman, her value lies in being a good girl, a good wife, a good mother and mother-in-law, and a good grandmother.  To meet these demands, the traditional Hmong women are faced with many social requisites, including those from the family, clan, and village.  Meanwhile, the Hmong women have a limited voice in the affairs of their society outside of the responsibilities in the home, and consequently, limited power in decision-making.  The Hmong women’s disadvantage was often associated with their lack of education.  Hence, the best way to improve gender equality was to raise the women’s educational level.

“The status of women has been assessed by measures of economic security, educational opportunities, access to birth control and medical care, degree of self-determination, participation in public and political life, power to make decision in the family, and physical safety” (Wade and Tavris, 1999:18).  Since the traditional subsistence economy of the Hmong has undergone changes, factors such as education, information, new kinds of crops, and a strong engagement with the market economy have transformed the Hmong way of earning a living. The Hmong women are no longer restricted within the private sphere of family. They are now actively involved in business and play an important role in economic development. They also participate in decision-making in the family and community.

However, the bargaining power of each woman varies because of different conditions.  For illiterate women, they might not think much about power, but rather emphasize traditional gender ideologies or moral norms concerning gender relations.  Their status has not changed much, since power and control remains mostly in their husbands' hands.  For educated younger women, their social status is undergoing a great change since they have brought home new concepts regarding gender roles.  It is apparent that women’s education and related income-earnings help improve gender equity.

Although the Hmong have retained many aspects of their identity and culture, it is inevitable that changing gender roles may become points of conflict between the men and women, and between the generations.  However, the modern Hmong woman appears to be integrating, with some success, their choices and roles in many areas, including marriage, family, economic activities, and education.  At the same time they are gaining some power over decision-making within the family and community.  These changes are leading to greater gender equality for the Hmong.
Posted by HWAT at 2:50 PM