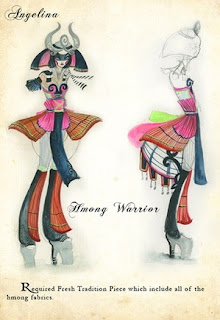 Sometimes we need a little reminder.  Why?  Because we forget.  We all do.  We forget how amazing Hmong women are.  The following is a post dated June 16, 2009 from equalityquilt.org (blogging for Minnesota Women's Consortium) by Cecelia.  Hmong women truly are Princess warriors.

Last Thursday, June 11, I attended an event organized by Hmong Women Achieving Together. This event, titled Hmong Women's Role in the Shaping of the Hmong, was part of a Speaker Series "to highlight and promote the work, leadership, and contributions of Hmong women." I walked away from the event filled with a renewed admiration for Hmong women and their accomplishments (as well as a belly full of delicious food!). Keynote speaker Dr. MaiNa Lee honestly noted that yes, Hmong women have traditionally faced discrimination due to a patriarchal society. In a rich Laotian family where the sons were among the most educated in the country, the daughters were illiterate. However, this patriarchy is not inherent to Hmong culture but rather formed after conquest. Dr. Lee pointed out that in ancient Hmong society many practices were matrilineal and that both genders emerged at the same time in the Hmong creation story (so much for us women being some guy's rib!). Even in times of patriarchy, Hmong women always had a certain power. Dr. Lee told enthralling stories about princess warriors and powerful men who were only able to gain such power through marriage alliances. And now--flashfoward to the present. In Minnesota, the first Hmong to get elected to office was female, and 6 out of 10 Hmong students at the UofM are female. At this event I saw and met many strong and wonderful Hmong women. Before my very eyes I saw them working as negotiators, political brokers and community organizers: modern princess warriors. Hnub Tshiab Boardchair MayKao Hang put it beautifully by saying that although Hmong women have come far in terms of equity, many are still reconciling their role as pioneers with their family duties as daughters-in-law. There's still a long way to go.

Despite the cool fact that Twin Cities landscapes favor women in burial (c'mon, that's cool), it's important to remember it's not just the western influence that has allowed for Hmong women's recent success. As Dr. MaiNa Lee stated, "Hmong women's emerging power has deep roots in Hmong society, politically, economically and socially." Don't forget those princess warriors! One story specifically tells of an ancient kingdom that fell because leaders did not listen to a princess warrior. Before she was killed, she promised she would return when rocks sprout flowers. Dr. Lee clicked the powerpoint ahead. The next slide: a picture from a recent trip to Laos. A picture of a rock sprouting flowers. The princess warriors are back, and they're here to stay.

Link to the original post:   http://equalityquilt.typepad.com/equalityquilt/2009/06/hmong-women-princess-warriors-clever-negotiators-political-brokers-community-achievers.html
Posted by HWAT at 11:13 AM