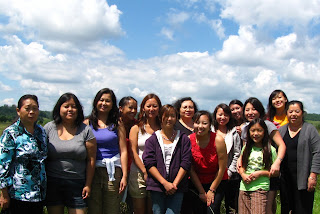 I joined Hnub Tshiab as a volunteer because I wanted to create a better world for my daughter, Summer and my niece, Lea. When I first heard about Hnub Tshiab’s mission, which is to be to be a catalyst for lasting cultural, institutional and social change to improve the lives of Hmong women, I thought, “How the heck are they going to do that? Good luck!” Nevertheless, I was touched by Sy Vang, a Keynote Speaker who talked about domestic abuse. I could relate to many of the things she talked about, including personal experiences. I had gotten married at the age of 14; I’ve had to pick up my aunt at a shelter and take her back home to an abusive husband; I’ve seen a few uncles take on second wives. Who had decided these things were acceptable? I had been looking for a place to volunteer to give back to the community, so I started volunteering and then became a Board member. In the process of giving my time and energy to this organization I met many strong, intelligent and loving Hmong women. I discovered that these women were fulfilling a need that I had long wanted. They were giving me the support and inspiration I needed to become a stronger person. I had found my sisterhood in these women who shared the same vision as me. I was transforming into the woman I always wanted to be: a proud, strong Hmong American woman.
While I was getting comfortable with my transformation, Hnub Tshiab held its first intergenerational retreat to pilot a program to help strengthen relationships among female clan members and friends. We invited our girlfriends, mothers, daughters, and nieces. I brought my mother, daughter, and sister. On the car ride to the retreat, I told my mother for the first time that I was involved with Hnub Tshiab. Not because I was afraid to before, but because I couldn’t tell her in the Hmong language what it means to “improve the lives of Hmong women”. The idea is a little radical. How do you share a dream that has never been tangible? At the retreat I told my mother, with the help of the other board members about a little project I am working on: trying to raise $50,000 this year and $3 million in the next couple of years to build the Hmong Women’s Center. The Hmong Women’s Center will be a place where we can gather and learn from each other. It will be a safe and fun place we can take our kids and learn how sew pa dau or haib kwg txia and celebrate Hmong women.
My mother is a hardworking and loving woman who has raised nine us of children with very little income. Even so, she always had money to buy me the thing I loved most: books. My mother always encouraged us to do well in school so we can get good jobs and not suffer. My mother, who had fed us these wonderful words of support and encouragement, was amazed by the type of work we were doing.  I think it took her the whole weekend to process that this little organization existed and could have such big dreams. I left the retreat satisfied with the time I had spent with my mother and the amazing women and girls I met. On the car ride home, my mother continued to ask me questions about the Hmong Women’s Center. I was surprised because she is usually not so inquisitive. I explained to her at one point we considered having a care taker for the home but that wasn’t going to happen anymore. My mother replied, “That’s fine. We will use the House and we will clean it up after ourselves”. Tears came to my eyes as I realized we had won my mother over. My mother’s use of the word “we” told me that she approved and supported what I was doing with Hnub Tshiab.
I had an epiphany. The work we are doing isn’t just impacting our daughters and nieces or my peers and me. It is also impacting our mothers and grandmothers. It is giving them hope that their daughters and grand daughters will have better lives; will be respected; will be able to make their own decisions to steer their futures.