Strength of a mother


Imagine learning that your only two children have been diagnosed with an incurable genetic disorder. Now, imagine both of them developing leukemia and needing bone marrow transplants at the same time. This is the reality of Mai Nhia Moua. Until one year ago, the name Fanconi Anemia wasn't even in her vocabulary, but now it's a nightmare that she is unable to awaken from.

Her oldest child, Dakota, had always dealt with bloody noses. These were not your everyday bloody noses. Dakota's nose would bleed for hours on end until she was bleeding from her eyes as well. More than once she needed blood transfusions from losing so much blood all due to a bloody nose. Wanting more answers for their daughter, Mai Nhia and her husband sought a genetic test. It came back positive for Fanconi Anemia.

The parents were in shock after researching more about this illness. Why them? Why their children? What did they do for this to happen? Questions weighed heavily on them.
They soon found out that Peyton, their younger child, also had Fanconi Anemia. Peyton's dad is in the Army and a few times was not able to be with them during this hard time so Mai Nhia felt alone. She had a very supportive family, but no one who truly understood what she was feeling and going through. Yet she persevered.

She sought and advocated daily for the best treatment for her children in between working as an elementary teacher. Many were telling her to continue to ua neeb, but she knew her children needed more than spiritual help. There were days that she couldn't keep her eyes open and days where it seemed they'd never dry from all the tears she wept.

Earlier this year, after Peyton's bone marrow biopsy, they learned some horrific news. Peyton needed a bone marrow transplant immediately. Before long, they were engulfed in the transplant process. Not too long after, Dakota had a severely bloody nose. Her blood counts had dropped far below comfort. She, too, would be in need of an immediate bone marrow transplant. Their parents were heartbroken, but determination and hope was on their side.

To the present: Peyton had his bone marrow transplant almost two months ago and Mai Nhia was by his side. He's doing remarkably well and was even walking just a few days after his transplant. Now it is Dakota's turn and, like the loving mother that she is, Mai Nhia shaved her head for her daughter.

Mai Nhia and her family's story will not be over when Dakota is healed from transplant. Fanconi Anemia has no cure and there's no telling what it will throw at them next, but I have a feeling they'll stand up to fight again and again and never give up.

Mai Nhia, you're one of the bravest mothers that I know. You have a lot of strength inside you and your love for your children should be written in textbooks. Don't let your mind ever start to make you doubt yourself. I love you all! 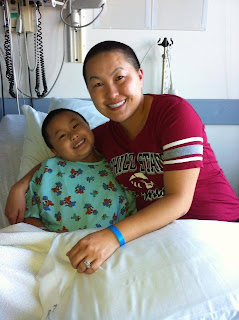